THE ELTE SAVARIA INSTITUTE OF TECHNOLOGY IS IN MOMENTUM 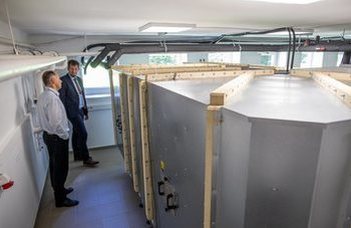 Unique technical equipment was handed over in Szombathely on 2 June. The cooperation of the ELTE Faculty of Informatics and its industrial partners, eCon Engineering Ltd. and Flexman Robotics Ltd., is aimed at exemplary developments projecting the future in the city and the region.

The Fluid Mechanics Laboratory was opened with the installation of a closed-circuit, horizontal (Göttingen type) wind tunnel in cooperation with eCon Engineering Ltd. With the wind tunnel optimised with Ansys simulation tools it is possible to model air flows and measure flow parameters due to the sensors. A special feature of the device, which is more than two-metre-high and takes up a floor area of sixty square metres, is that the air in it can be cooled significantly below freezing point, and by injecting water, it can also be used to model icing processes on airplane wings, wind turbine blades, and power lines, for example. This field of application is unique not only in Hungary but also in our region. Thus, in addition to its application in education, it will also certainly play an important role in research and industrial projects, as well as in international collaborations.

The six-axis Yaskawa industrial welding robot, which was installed in cooperation with Flexman Robotics Ltd., was also presented at the event. With the robot, the students will be able to learn the basics of welding technology in addition to track programming in the future. The equipment will allow both Bachelor’s and Master's students, as well as colleagues pursuing their Ph.D. studies related to cyber-physical systems, to participate in modern Industry 4.0 research. On the occasion of the event, Attila Farkas, managing director at Flexman Robotics Ltd., and Zoltán Horváth, dean for the ELTE Faculty of Informatics, signed an agreement on further cooperation. This paves the way for future collaboration in research in addition to operational and consulting tasks related to the equipment, as well as the company’s contribution to education in engineering through thesis supervision, among other things. 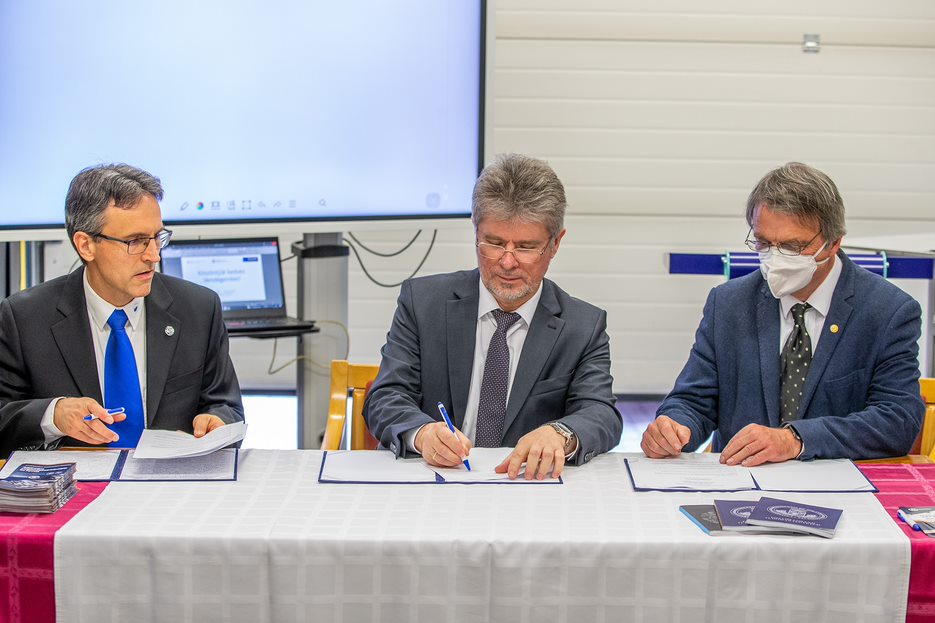 The investments were supported by the Competence Centre for Software and Data-intensive Services at the ELTE Faculty of Informatics, whose aim is to develop competitive products and services based on the knowledge capital of the university in cooperation with economic actors.

“It is advantageous to have close cooperation with the ELTE Faculty of Informatics and the mechanical engineering training, because responsible people work there, who have considerable serious knowledge. I believe and I know that a responsible person with a vast knowledge not only wants to get over a task but also goes forward and invests in the future”, said András Nemény, mayor of the County-Rank City of Szombathely, at the beginning of his welcome speech at the handover ceremony. Afterwards, he emphasised that those who give innovation and performance, rely on knowledge and keep scientific life in mind, which brings practical benefits to the city. “Today’s occasion demonstrates exactly this, as innovation is investment in the future. The current city council in Szombathely has defined the city of the future,” the mayor concluded his speech. 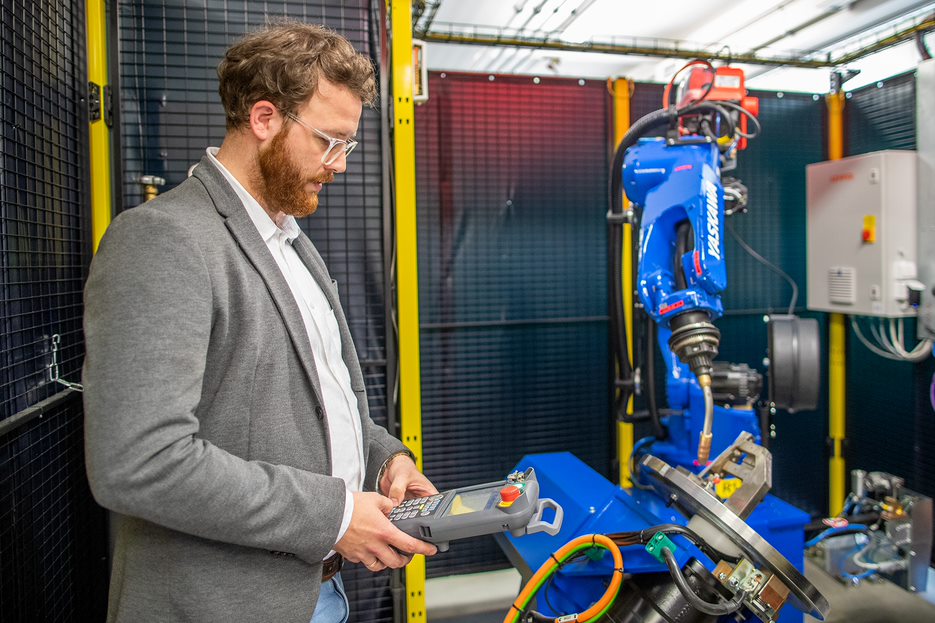 The ELTE Faculty of Informatics has been establishing effective mechanisms for a third-generation university, connecting education, research, and innovation for the coming decades, in a long-term, strategic partnership with companies engaged in IT and mechanical engineering training. “The infrastructure development taking place here serves educational and research development purposes. It enables engineering students to take part in research and development projects serving market needs. At the same time, it also supports the enhancement of the university’s scientific potential, since the foundation of the fourth industrial revolution, the digitalisation of industry, takes place at the intersection point of engineering and IT sciences. In Szombathely, the ELTE Faculty of Informatics contributed to this with knowledge and training in data science, artificial intelligence, and software development, among other things,” emphasised Zoltán Horváth, dean of the ELTE Faculty of Informatics.

Gábor Kiglics, managing director of eCon Engineering Ltd., who is responsible for the development and construction of the wind tunnel, highlighted two important factors at the press conference. On the one hand, this project was realised in exemplary cooperation both for the company and education, bringing together specialists in the fields of theoretical and practical education, computer simulation, automation, and mechanical design and assembly. On the other hand, the implementation of the wind tunnel, which is unique in our region, clearly demonstrates that

projects with high added value also have a place at the level of the national economy.

“Developments that require engineering performance like this may become a breakout point for our country so that Hungary would not only be regarded as an assembly plant for large Western companies. Such scientific novelties and related services could bring professional recognition, keep our professionals at home, and generate a return on the national economic level, as well. The collaboration of market players, developers, and educational institutions is fundamental for success, for which high-quality initial training must be a basic condition”, concluded the executive. 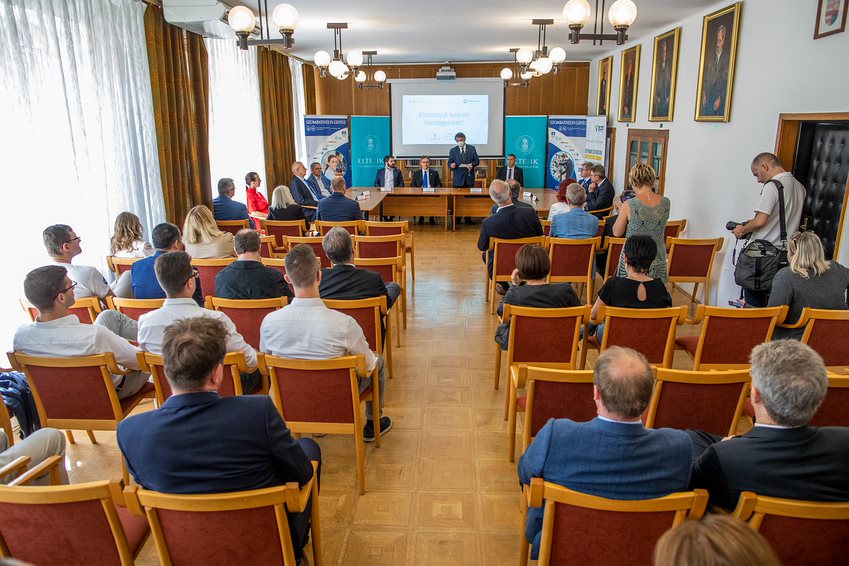 In his speech, Péter Balázsy, chief notary for Vas County, recalled the day when the leaders of the city and the biggest companies at that time gathered in the government commissioner’s office to promote the issue of mechanical engineering training. “One year later, in 2013, we already concluded a cooperation agreement, and then, in 2015, the first mechanical engineering course started. Since then, many developments have been carried out, including today’s major laboratory development.” He concluded his speech with congratulations and added that “We must continue to work together in order to have more training and developments in Szombathely. The recipe for success that managed to start this training ten years ago may also contribute to the success of other local training programmes by ELTE.

The existence of a good training centre is not only in the interest of the city and county, but the region, as well,

Referring to the statistical data of the International Robot Federation, Attila Farkas, managing director of Flexman Robotics Ltd., demonstrated briefly that Hungary has developed considerably in an international comparison in the past decade. The number of industrial robots per 10,000 employees has increased tenfold. As a result, our country has reached a level close to the world average. That is why it is highly important to involve the education of application technology of industrial robotic systems in the engineering training.

Flexman Robotics Ltd. supplied the YASKAWA arc welding robot cell purchased by the Savaria Institute of Technology of the ELTE Faculty of Informatics from the financial support. This robot cell technically belongs to the best ones in the world, so it enables the students to learn the most modern technology, and the education can be made even more effective using the off-line programming software with twenty stations, which belongs to the robot cell. Flexman Robotics has always placed great emphasis on supporting education throughout its operation. This is not only limited to industrial robots installed at educational institutions but also includes professional support for education. The local manifestation of this is the collaboration agreement solemnly signed today together with the Savaria Institute Technology of the ELTE Faculty of Informatics.