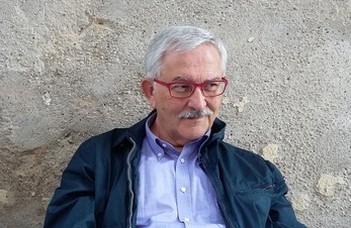 How does a geodesist become involved with cartography? How does that lead to the development oft new field, cartographic heritage? And whot does the International Cartographic Association (ICA) have to do with all of that? An interview with Evangelos Livieratos, professor emeritus of the Faculty of Engineering, Aristotle University of Thessaloniki (AUTH).

How is your work related to our university, faculty and institute?

My relationship is twofold: On the one hand, the scientific and technical object of my research is very similar to that of my colleagues at the Institute of Cartography and Geoinformatics and on the other hand, there is a particular personal feeling that connects me with the ‘name’ of your university. Let me start with the second: In the first phase of my scientific life, I was studying the differential three-dimensional geometry of the gravity field. It was then when I came in contact with the work of Eötvös Loránd, associated with the measurements of the gravity gradients. I still remember my admiration about Eötvös’s pioneering experiment on the icy surface of the lake Balaton with his torsion balance. The Eötvös tensor followed me for many years working on relevant topics. So you may understand my emotion when the university named after this great scientist, has generously offered me the exceptional honor to become one of its honorary doctors. Then in the more recent times, working on cartography and maps but always keeping my ‘geodetic thinking’ alive, I found affinities with the work of colleagues in ELTE and very similar ways of reasoning and doing research; maybe because we both belong to a ‘Central European type’ of university education tradition. It was very easy to develop ties with the Institute and to shear common ideas with its members; also the fact that my partners and I come from engineering and work in an engineering faculty at home, found it challenging to cooperate with the ELTE Institute functioning in a faculty of informatics. It is really unique a cartography team in engineering to develop synergies with a cartography team in informatics. But also, it is inspiring that both teams belong to universities, like ours, keen to keep high the culture and education in humanities and classics, where cartography and maps have an important role to play, especially in the era of the Digital.

What is the subject of your honorary doctoral lecture? Why did you choose this specific subject?

The subject of my lecture is how to approach the smart symbiosis of cartography (as discipline) with maps in its centre with the geographic information science (as the scientific context of various issues related to the processing and management of spatial data and information – including the associated technologies, e.g. GIS, drones etc.). Is there any diversity between the two and a symbiosis needed? To answer properly the question, we have first to conceive the fact that both cartography and geographic information science meet at the same result of both: the representation. Cartography produces maps and geographic information science provides images. Both are representations. The images look dominant because provided massively, rapidly, and rather cheap by a variety of sensors, influencing the commercial, social and environmental feedback loop. They are by definition closer to the conditions of the rapidly evolving fourth industrial revolution. Who then cares about cartography as discipline and its intrinsically related literacy? Is then cartography declining? Serious questions asking for answers, especially when the modern actors in the geographic information science business are coming from a variety of fields of knowledge without any preparation in conceiving the major issue of representation, among the highest in the history of mankind. Everybody produces images nowadays. No problem! The problem begins when those producers of images start to believe – arbitrarily – that the images are maps…

Of course, images could become maps but only if one knows what the cartographic literacy teach to transform and represent the images into maps properly.

In this perspective cartography will be there ready to offer literacy in a smart symbiosis with geographic information science – far from ignoring or underestimating the cartographic literacy. I choose the specific subject in order to show how the need for a revival of a well-articulated cartographic literacy, ordered and understood, remains still a necessary and sufficient condition for better geographic representations, where quality in efficacy should be the main quest for the benefit of the users.

In my student-times – in the second half of the Sixties – a degree in surveying engineering from the Technical University of Athens, of Central European type, meant a gained set of knowledge including geodesy (mainly geometric and positioning), land surveying (with adjustment of measurements), photogrammetry and general cartography (mainly map projections). Due to certain ‘restrictive conditions’ related to my country’s modern history, cartography and photogrammetry (in the context of mapping and map making) were constrained in our education, without securing professional outlets, since aerial photographs and maps were classified. Land surveying was the main task for professional career together with road construction and hydraulic works, which was the complement of the profile of the so-called ‘rural and surveying engineering’ graduate. The field of geodesy including – soon after – gravimetry and satellite geodesy was encouraged for graduate studies abroad after to the ‘restricted’ photogrammetry and cartography. This is the reason why so many Greeks made international careers in geodesy since the domestic career opportunities for this discipline were very limited. Only later, when the ‘restrictive conditions’ were lifted, there was some progress in the fields of photogrammetry and cartography. In this environment at home, being a young assistant at the Technical University of Athens, even if I was a geodesist,

I was asked in the late Seventies to cover gaps in the faculty’s curriculum by organizing for the first time in Greece a complete course of thematic Cartography,

starting from scratch. As a full professor in 1979 at the newly established Chair of higher geodesy and cartography, at the faculty of engineering at the Aristotle University of Thessaloniki, and after giving space to new and young colleagues to cover the field of ‘higher geodesy’ I have focused with full energy, to gain the temps perdu for academic cartography in Greece. Three new courses were then designed and developed: general cartography, thematic cartography, and mathematical cartography, many diploma theses were assigned, as well as doctorates and research projects in cartography, encouraging graduates to continue in cartography; a number of them are now university colleagues active in cartography. International visibility and participation was a priority too in Thessaloniki, where the Hellenic Cartographic Society was also founded there in 1994, active member of the International Cartographic Association (ICA). So the answer to your question is evident. The power of things and the flow of situations together with the inspiring and refreshing results gained from the openness to mobility turned my interest and research from geodesy to cartography in the mid-Eighties. But I kept my ‘geodetic thinking’ in this new Endeavour, the spirit of implementing – thanks to my engineering background – and the curiosity for innovation together with my cultural interests unaltered since my youth. Cartography is historically an issue close to culture, interesting people as such, open at the same time to innovations in the era of the Digital and I am happy to share this with many fellow colleagues in the ICA, the ELTE cartography team among them!

Why and how did you turn your attention specifically to cartographic heritage?

It was a result of cultural curiosity. Working with the geodetic methodologies for the analysis and interpretation of deformation induced by the comparison of corresponding features on different surfaces (known e.g. in map projections, and differential mapping in general) I thought the relevance to test comparative analyses of the geometric content of old (historic) maps. From this started the idea to combine cartography to cultural heritage in order to develop the new concept of ‘cartographic heritage’. The challenge for this was the embodiment of the new concept into the Digital, thus

combining the cultural dimension of Cartography with Information Technologies.

This was also an attractive item for calling the younger generation of cartographers to follow a new path. My proposed idea for introducing the cartographic heritage was well accepted by the ICA Executive when presented in 2005 at the International Cartographic Conference (ICC) in A Coruña, Spain and a new group of study and research was born. In the next ICC in 2007, some few expressed ‘skepticism’ (rather due to confusion of concepts if not due to expediency) about the ‘identity relation’ between heritage and history, questioning thus the need of cartographic heritage to exist within the ICA. But thanks to the strong opposite arguments of prominent cartographers, like Ferjan Ormeling – honorary Doctor of both our universities in Budapest and in Thessaloniki – cartographic heritage is still alive and active preparing its 16th international conference next September in Cluj-Napoca.

How did you get in touch with ELTE?

This was the result of the strong participation of both the Hungarian and the Greek cartographic delegations in the activities of the ICA. Especially thanks to the active and dedicated contribution of prof. László Zentai in the leadership team of ICA. He understood the impact of cartographic heritage and supported the Commission in its work and especially its activities. He was always present in our conferences, consistent and reliable in his authority, with the extraordinary merit to respond always promptly to any correspondence giving solutions to problems and support the actions, encouraging also his younger ELTE cooperators to participate actively in the Commission work. In addition, he offered ideas, as it was his proposal to add cartographic heritage in the tasks of Humanities, supporting our initiatives to cooperate with Libraries. In this context the touch with ELTE was the natural result enforced by the active and productive presence of assoc. prof. Mátyás Gede first as the vice-chair of the Commission and then as the Chair, leading the Commission’s new period, together with the important contribution of ELTE cartographers, in close contact with the Thessaloniki cartography group.

What topics are you currently working on? What are your plans for the future?

After just publishing a new book about the Geospatial Challenges (of Greece) after 1821 – the year of the Greek Revolution for Independence – I am currently working with my partner colleagues at the CartoGeoLab of the Aristotle University of Thessaloniki (AUTH) in a big research project ‘Digital Library Map System’ sponsored by the Hellenic Foundation for Research and Innovation (HFRI) for digitizing and linking textual with cartography data and visualization of historic maps for promoting the culture of maps to the public and assisting researchers in their work, installed and functioning at the AUTH Central Library. As to my future plans, I would like to make up for what I missed during the Covid pandemic: my work in promoting cartographic heritage to the general public in association with Libraries and the feasibility of developing a system, I have in mind, for the capturing of toponyms in old maps.