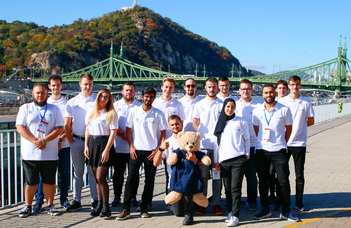 From the TechTogether competition, held in Budapest, at Bálna in October 18-19, 2022, Mechanical Engineering students of ELTE Faculty of Informatics, Savaria Technical Institute, returned home with the 1st place and 5 special awards on top of that.

TechTogether is a national engineering competition between prestigious Hungarian universities. This year, a total of 14 teams participated in the championship. The teams had to solve tasks or issues suggested by various companies representing different business fields including informatics and engineering.

Among the 16 members of the ELTE team, which was the only team with an international lineup, there were three international students including Hafida Mahu from Morocco, Asad Ahmed Khan from Pakistan, and International Student Ambassador Abdelrahman Moawad from Egypt. The team was led by Kristóf Horváth. Their outstanding results in this competition are yet another example of the quality of research and education at ELTE.